Looking for ways to combat hard water? Call the experts at Jeffrey Gray Plumbing at (707) 600-2969 to install your new water softener system Repair ! Access exclusive online specials and coupons and save on your installation or repair. 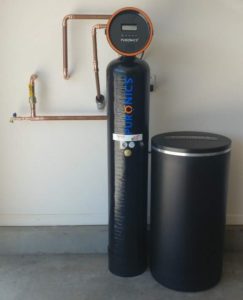 Did you know that the film or coating on all those cleaned dishes, clothes, skin, hair, appliances and plumbing fixtures is all from hard water? Combat hard water with a new water softener installation. The skilled technicians at Jeffrey Gray Plumbing can help you with professional installation. We serve customers throughout Solano e County, Napa County, and Yolo County.

Curious to see what homeowners are saying about us? Find out by reading our customer reviews and feedback.

What Problems Can a Water Softener Solve?

Hard water can lead to nasty problems for the plumbing system in your home or business – from clogging your shower head to making all of your drinking fountains turn white from scale buildup.

One of the most annoying things about hard water is that itch you have when you get out of a nice shower or bath. There is a way to get rid of all of that. The reliable team at Valley Plumbing and Drain Cleaning is here to help you solve this problem.

A water softener will make sure that all of your dishes stay clean and that you have less buildup on your faucets. And even better – your skin won’t feel as itchy after a shower.

How Does a Water Softener Work?

The Solution Is The Problem

While water is in the ground, it picks up soluble bits of whatever it passes through. While this can mean contamination that makes the water unfit to drink, in many cases it simply means that the water contains minerals found in the earth. Of these, calcium and magnesium are of particular importance because they affect the water's ability to function in our homes. These minerals make our water hard.

One effect of hard water is that soaps and detergents lose some effectiveness. Instead of dissolving completely, soap combines with the minerals to form a coagulated soap curd. Because less soap is dissolved, more is required. And the sticky insoluble curd hangs around--it clings to the skin and may actually inhibit cleansing. Washed hair seems dull and lifeless.

In the laundry, things aren't much better. The soap curd can work its way into your clothes as they're being washed in your automatic washing machine. This can keep dirt trapped in the fibers, and it can stiffen and roughen the fabric.

The solution to the problem is to get rid of the calcium and magnesium. While there are chemical treatments that do this, the most popular answer is a water softener.

The typical water softener is a mechanical appliance that's plumbed into your home's water supply system. All water softeners use the same operating principle: They trade the minerals for something else, in most cases sodium. The process is called ion exchange.

The heart of a water softener is a mineral tank. It's filled with small polystyrene beads, also known as resin or zeolite. The beads carry a negative charge.

Most popular water softeners have an automatic regenerating system. The most basic type has an electric timer that flushes and recharges the system on a regular schedule. During recharging, soft water is not available.

A second type of control uses a computer that watches how much water is used. When enough water has passed through the mineral tank to have depleted the beads of sodium, the computer triggers regeneration. These softeners often have reserve resin capacity, so that some soft water will be available during recharging.

A third type of control uses a mechanical water meter to measure water usage and initiate recharging. The advantage of this system is that no electrical components are required and the mineral tank is only recharged when necessary. When it is equipped with two mineral tanks, softened water is always available, even when the unit is recharging.

Is a Water Softener Right For You?

There are several types of water softeners, and having a qualified technician come out to your home for an inspection is the best way to know what options are right for you.  We will help you find the right size and the right type of unit for your specific needs.

Jeffrey Gray Plumbing offers personalized solutions and expert service at a fair and upfront price. Our experienced, respectful technicians get the job done right the first time, and don’t leave a mess when they leave. In fact, it is our goal to leave your house cleaner than we found it. We believe in educating our customers to make sure you can make the best decision for you and your home.

Whether you are looking to install a new water softener, or you need to repair or replace your current one, give us a call at (707) 600-2969. We will make sure you find the ideal unit for your unique situation. Find out why homeowners and business owners turn to us for their water softener needs.